Striking from the Margins. State, Religion Devolution of Authority in the Middle East. A new book edited by Aziz Al-Azmeh and Nadia Al-Bagdadi, et al. 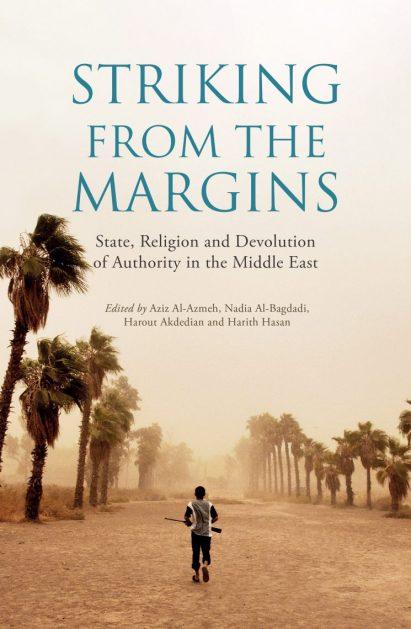 Since the collapse of the Soviet Union, the Arab world has undergone a series of radical transformations. One of the most significant is the resurgence of activist and puritanical forms of religion presenting as viable alternatives to existing social, cultural and political practices. The rise in sectarianism and violence in the name of religion has left scholars searching for adequate conceptual tools that might generate a clearer insight into these interconnected conflicts.

In Striking from the Margins, leading authorities in their field propose new analytical frameworks to facilitate greater understanding of the fragmentation and devolution of the state in the Arab world. Challenging the revival of well-worn theories in cultural and post-colonial studies, they provide novel contributions on issues ranging from military formations, political violence in urban and rural settings, transregional war economies, the crystallisation of sect-based authorities and the restructuring of tribal networks.

Placing much-needed emphasis on the re-emergence of religion, this timely and vital volume offers a new, critical approach to the study of the volatile and evolving cultural, social and political landscapes of the Middle East.