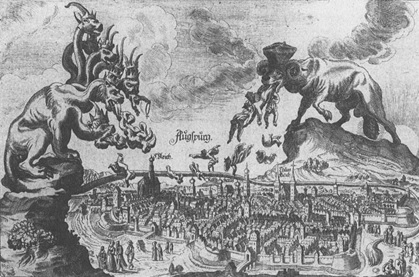 Together with the Crucifixion, the Heavenly Jerusalem is Christianity’s most potent image. Not only as representation of salvation itself, but of perfect coexistence: the ideal community. Hardly surprising, the image enjoyed great popularity among medieval urban protagonists. Fraternal love, mutual aid or common good, the underlying principles of urban life, closely resembled Christian core-values. Anticipating celestial co-habitation, it was argued, the city surely was the best form of political order on earth, best serving the salvation of its community-members. The city no less anticipated its heavenly counterpart. Surprisingly, much later, amidst the turmoil of Germany’s Thirty Years’ War, the urban identification with the Heavenly Jerusalem reappeared. Especially pamphleteers from Lutheran imperial cities used contrasting images of a Roman Antichrist vis-à-vis their own salvationary communities. Their aims were tangible enough; to justify resistance against an imperial – catholic – overlord. At the same time, however, drawing on the longstanding urban tradition of sacred self-representation really seemed at odds with Luther’s strict division of the earthly and heavenly realms.

Theo Pronk (1979) is lecturer in Late Medieval and Early Modern History at the University of Leiden and the Erasmus University of Rotterdam. Here he is currently completing his promotion on the sacred representation of cities during the Reformation-era; on which he published several articles. Recipient of numerous scholarships, he has been researching at the libraries and archives of Augsburg, Gotha, Nuremberg and Wolfenbüttel, studied at the Universities of Frankfurt and Bologna and was PhD Fellow at the University of St. Andrews. He is also a teacher, historical advisor, and curator in the Dordrecht Museum of Fine Arts, specialized in Dutch seventeenth-century painting.