Book launch: Trust and Happiness in the History of European Political Thought 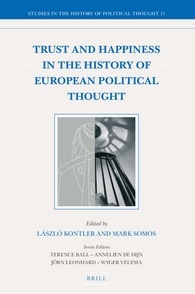 cordially invites you to a book launch:

Trust and Happiness in the History of European Political Thought

The notions of happiness and trust as cements of the social fabric and political legitimacy have a long history in Western political thought. However, despite the great contemporary relevance of both subjects, and burgeoning literatures in the social sciences around them, historians and historians of thought have, with some exceptions, unduly neglected them. In this volume, http://www.brill.com/products/book/trust-and-happiness-history-european-political-thought – based on the third international conference of the European Society for the History of Political Thought at CEU in 2014 – editors László Kontler and Mark Somos bring together twenty scholars from different generations and academic traditions to redress this lacuna by contextualizing historically the discussion of these two notions from ancient Greece to Soviet Russia. Confronting this legacy and deep reservoir of thought will serve as a tool of optimizing the terms of current debates.

CEU President and Rector Michael Ignatieff, in whose recent work trust figures as one of the “ordinary virtues” holding together communities, will discuss the volume with co-editor and CEU History professor László Kontler, and Zoltán Gábor Szűcs, research fellow at the Hungarian Academy of Sciences, Centre for Social Sciences (Institute of Political Science).