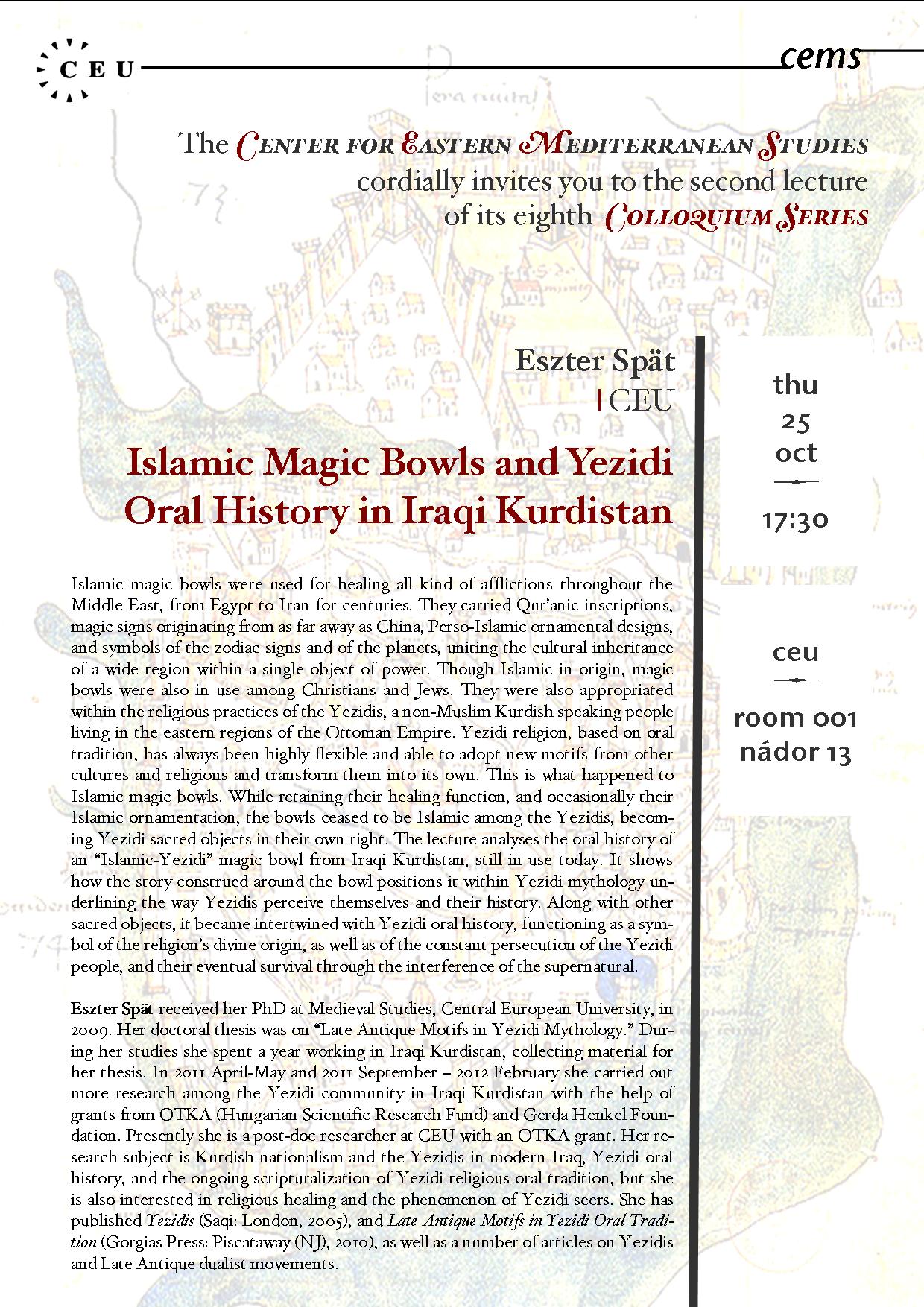 Islamic magic bowls were used for healing all kind of afflictions throughout the Middle East, from Egypt to Iran for centuries. They carried Qur’anic inscriptions, magic signs originating from as far away as China, Perso-Islamic ornamental designs, and symbols of the zodiac signs and of the planets, uniting the cultural inheritance of a wide region within a single object of power. Though Islamic in origin, magic bowls were also in use among Christians and Jews. They were also appropriated within the religious practices of the Yezidis, a non-Muslim Kurdish speaking people living in the eastern regions of the Ottoman Empire. Yezidi religion, based on oral tradition, has always been highly flexible and able to adopt new motifs from other cultures and religions and transform them into its own. This is what happened to Islamic magic bowls. While retaining their healing function, and occasionally their Islamic ornamentation, the bowls ceased to be Islamic among the Yezidis, becoming Yezidi sacred objects in their own right. The lecture analyses the oral history of an “Islamic-Yezidi” magic bowl from Iraqi Kurdistan, still in use today. It shows how the story construed around the bowl positions it within Yezidi mythology underlining the way Yezidis perceive themselves and their history. Along with other sacred objects, it became intertwined with Yezidi oral history, functioning as a symbol of the religion’s divine origin, as well as of the constant persecution of the Yezidi people, and their eventual survival through the interference of the supernatural.

Eszter Spät received her PhD at Medieval Studies, Central European University, in 2009. Her doctoral thesis was on “Late Antique Motifs in Yezidi Mythology.” During her studies she spent a year working in Iraqi Kurdistan, collecting material for her thesis. In 2011 April-May and 2011 September – 2012 February she carried out more research among the Yezidi community in Iraqi Kurdistan with the help of grants from OTKA (Hungarian Scientific Research Fund) and Gerda Henkel Foundation. Presently she is a post-doc researcher at CEU with an OTKA grant. Her research subject is Kurdish nationalism and the Yezidis in modern Iraq, Yezidi oral history, and the ongoing scripturalization of Yezidi religious oral tradition, but she is also interested in religious healing and the phenomenon of Yezidi seers. She has published Yezidis (Saqi: London, 2005), and Late Antique Motifs in Yezidi Oral Tradition (Gorgias Press: Piscataway (NJ), 2010), as well as a number of articles on Yezidis and Late Antique dualist movements.