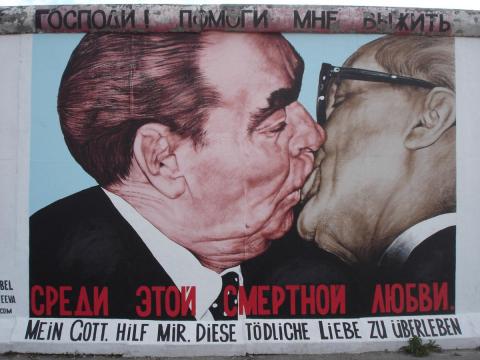 We are approaching both the end of the academic year and our Research Seminars. For this week, we will delve deeper into the history of East Germany with professor Sabrina P. Ramet (Department of Sociology and Political Science, Norwegian University of Science and Technology) through her presentation titled  "Nonconformity, Dissent, Opposition, and Resistance in the German Democratic Republic". Join us for another interesting lecture this Wednesday! (Link: https://us02web.zoom.us/j/89745952412?pwd=WVBrV3NUYzBCMXF1WDZBNk0rRHJ4UT09, Meeting ID: 897 4595 2412, Password: 1ywYvr)

"Every society has manifestations of noncompliance – typically nonconformity, dissent (which may be understood as the conscious embrace of views or engagement in actions in opposition either to the government or to society at large, chosen for some higher social or political reason), and opposition (more or less legal activity aimed at challenging and changing the policies or incumbents in the regime). In some societies, at some points in time, there may also be manifestations of resistance, a form of opposition which typically involves the aspiration either to prevent the government from pursuing policies of highest priority to the party in power, or to overthrow the government or at least remove its chief office-holders. In the German Democratic Republic, which existed from 1949 to 1990, all four forms of noncompliance made themselves felt. In terms of resistance, the only two manifestations were the mass uprising against the regime in June 1953 and the weekly protests in Leipzig, Berlin, and elsewhere in late 1989. There were, broadly speaking, two kinds of opposition – outside party channels and within the party. Among the latter, the efforts by Wilhelm Zaisser and Rudolf Herrnstadt in 1953 and by Karl Schirdewan, Ernst Wollweber, and Gerhard Ziller during the years 1956-1958 to remove Walter Ulbricht from the leadership of the ruling party came to nothing and all of them lost their positions (or, in the case of Ziller, died by suicide). Meanwhile, the flight of nearly half a million East Germans to the West, across the open city of Berlin, was the clearest expression of widespread opposition to the socialist regime and induced the ruling party to order the erection in August 1961 of the Berlin Wall, known in official discourse as “the Anti-fascist Defensive Barrier“. In some ways, however, it was intellectual dissent which was the most interesting, reflecting as it did not only integrity but also courage and insight into the workings of the system. The three most influential dissidents were physicist Rudolf Havemann (1910-1982), popular balladeer Wolf Biermann (b. 1936), and editor/writer Rudolf Bahro (1935-1997), whose book, The Alternative, outlined a non-Leninist but Marxist alternative to the system in place in East Germany. Finally, among nonconformists, one may mention religious nonconformists, independent thinking in the arts, and defiant rock groups such as Pankow and punk bands such as Namenlos (Nameless), which sang the provocative song “Nazis wieder in Ostberlin” (Nazis again in East Berlin) in 1983. In conclusion, while opposition and resistance made a bigger splash, nonconformity and dissent not only forced the SED regime to make changes (concessions) in the religious sphere, the sphere of sexuality, and the cultural sphere, but also compelled the regime to abandon its idea that it could create a new 'socialist nation'. Such is the power of nonconformity and dissent."