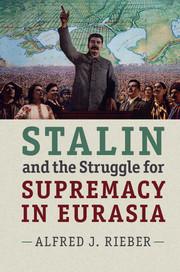 This is a major new study of the successor states that emerged in the wake of the collapse of the great Russian, Habsburg, Iranian, Ottoman and Qing Empires and of the expansionist powers who renewed their struggle over the Eurasian borderlands through to the end of the Second World War. Surveying the great power rivalry between the Soviet Union, Nazi Germany and Imperial Japan for control over the Western and Far Eastern boundaries of Eurasia, Alfred J. Rieber provides a new framework for understanding the evolution of Soviet policy from the Revolution through to the beginning of the Cold War. Paying particular attention to the Soviet Union, the book charts how these powers adopted similar methods to the old ruling elites to expand and consolidate their conquests, ranging from colonisation and deportation to forced assimilation, but applied them with a force that far surpassed the practices of their imperial predecessors.