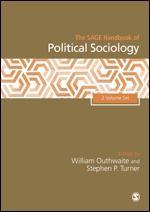 The SAGE Handbook of Political Sociology offers a comprehensive and contemporary look at this evolving field of study. The focus is on political life itself and the chapters, written by a highly-respected and international team of authors, cover the core themes which need to be understood in order to study political life from a sociological perspective, or simply to understand the political world. The chapter on fascism by Griffin and Iordachi aims at demystifying fascism as an ideological concept and at clarifying its role as a driver of social change, with a focus on fascism’ transclass social support and utopian and violent campaign of social engineering.