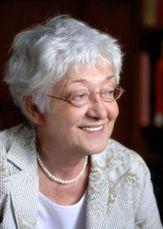 It is with great sadness that the Department of History has learnt about the passing away of Professor Katalin Péter, an outstanding historian and a founding member of the department, who made a significant mark on the development of historical studies at CEU.

Maintaining her several decades-long affiliation with the Institute of History of the Hungarian Academy of Sciences, Professor Péter enthusiastically took the opportunity to work with international students when our first MA program was launched in 1992. She also became the first director of doctoral studies at the Department of History when our PhD program was established in 1996. Besides History, she keenly cooperated with the Department of Medieval Studies, and remained in touch with the university after her retirement from teaching in 2007.

Her passionate love, encompassing knowledge and profound understanding of the early modern era, in particular the social, cultural and religious history of the Protestant Reformation and Catholic Reform were just the professional qualifications that made Professor Péter a respected colleague, and a teacher and supervisor in high demand. At the root of her outstanding qualities as a historian lay a still deeper and broader interest in the human being, past and present, which enabled her to voice insights and ask questions that were as unusual as they were pertinent on topics way beyond her nominal historical specialization. In her earlier work, this paramount interest in the human manifested itself in inquiries into matters and contests of faith and conviction, beliefs and doubts, and the cultural forms of their expression. More recently, whether studying and writing about village pastors and their wives, high noblemen and noblewomen, or princes and princesses, her focus was their lived experience as shaped by family relations, childhood, marriage and divorce. She discovered the significance of emotions in history before it became fashionable in international academic research. The same attitudes governed her incomparable sensitivity in her relationship to colleagues and especially students: mentoring was for her not merely strict and proper academic guidance, but an endeavor to understand personal situations, aspirations and anxieties, with a view to providing all-round support. Junior colleagues could count on her for sharp-eyed, critical appreciation of their first publications in her own works. A grand dame of the profession, she was generous and elegant, yet familiar; her questions direct, but never embarrassing; her irony mild and cheerful.

Katalin Péter will be sorely missed by generations of colleagues in Hungary and abroad. CEU and the Departments of History and Medieval Studies would like to express deep condolences to her family and friends.